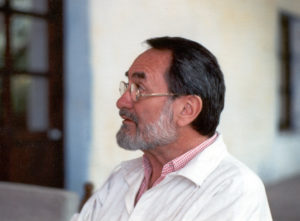 Iker’s career in the field of museums began at the National School of Anthropology and History (ENAH), a dependency of the National Institute of Anthropology and History (INAH), an institution that until the first half of the 1950s offered studies in museography. He had as companions two other prominent museographers: Mario Vázquez and Alfonso Soto Soria. As part of the school practices, he traveled to Palenque with Dr. Alberto Ruz Lhuillier, who coordinated an important archaeological project in the Mayan area in 1953 and 1954. On his return, Covarrubias proposed that he reproduce, in the old National Museum, the Chamber of Palenque, as well as the restructuring of some exhibition rooms due to the departure of the history collections for the National Museum of History – Chapultepec Castle facilities, which was inaugurated in 1944.

The INAH’s director PHD Eusebio Dávalos, awarded him with a scholarship in 1955 to travel and visit the best museums in order to learn about their strategies and operation, to expand their knowledge and exhibition techniques. The following year he traveled to Paris to the ICOM central office where he had contact with leading museologists such as George Henri Riviere and collected information at the Documentation Center. At the INAH he achieved an important development, at the beginning of the sixties of the last century he was part of the team which intervened in the planning of the new National Museum of Anthropology. At the beginning of the seventies he was invited to collaborate with other prominent museum professionals, such as his former colleagues from the ENAH and the architect Felipe Lacouture Fornelli to organize the program of the Inter-American Museum Training Courses Mexico-OAS, where he trained several museographers from Latin America and the Caribbean. Later, from 1996 to 1997, he was part of the team that planned a new program for a master’s degree in museology that has been taught since then at the Manuel del Castillo Negrete National Conservation, Restoration and Museography School.

At the time when the PHD Guillermo Bonfil Batalla was the director of the INAH he was designated director of Museums and Exhibitions and he began to strengthen the INAH’s  museums network; in that position, important projects emerged, such as the museums installed in the capitals of some states of Mexico, as well as community and school museums.

His participation in ICOM was committed and he was the founder of ICOFOM-Mexico.

At the end of his administrative responsibility in 1977, with some colleagues from the Museums and Exhibitions Direction, he founded Museográfica, one of the first private companies dedicated to museography. UNESCO, through ICOM, began to request advice from him for a variety of museums such as the Kuwait museum, the team that Iker joined for this mission was responsible of evaluating the building, the collection and the definition of items. On the other hand, as an adviser had to work on other projects such as the new Egyptian museum, the Nubian Museum in Aswan, and an architectural program to expand the Pharaonic Museum, since the World Bank would donate the funds to strengthen a tourist attraction resource. His team also participated with a project for the Louvre Museum restructuration and in the Olympic Museum of Lausanne, Switzerland their work received the recognition of the Olympic Order by the Olympic Committee.

At the interior of the country, Museográfica left important projects such as the Science Center in Sinaloa and the Anthropology Museum of Xalapa, Veracruz.

Iker was a highly recognized museums’ professional, a teacher, a friend, a simple person who was very loved by all. His departure hurts us and these lines serve as a recognition of his important career.