Latin American and Caribbean Perspectives on The New Museum Definition: “Territories and boundaries towards a new definition of museums: concepts, origins and keywords in Latin America and the Caribbean”, September 29, 2021, 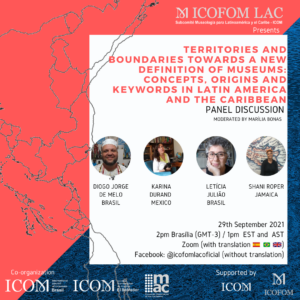 The third webinar will address the theme “Territories and boundaries towards a new definition of museums: concepts, origins and keywords in Latin America and the Caribbean” on September 29, 2021, at 2:00 pm (GMT-3 – Brasília time).

Attention: you will receive an email with the link to access the platform on the week of the event.

Professor of the Museology Course at the Federal University of Pará / Brazil and Pai Pequeno in Terreiro de Umbanda Cabocla Mariana and Caboclo Manezinho in Conjunto Maguari, Belém do Pará, Brazil. Doctor in Museology and Heritage from UNIRIO / MAST and Professor and History of Earth Sciences from UNICAMP, Master in Geology (UFRJ) and Bachelor of Museology (UNIRIO) and Biology (UniverCidade). He is the Coordinator of the Museu Virtual Surrupira de Encantarias Amazônicas and has been working on research that is articulated between Theoretical Museology, Afrodiasporic Religions, Imaginary and Amazonian Mitopoetics, Memory and History of Science.

Doctorate in History (2008), Master in Political Science (1992) and Graduate in History (1981 and 1983) from the Universidade Federal de Minas Gerais. Associate Professor at the Universidade Federal de Minas Gerais (UFMG), working in the career of Museology / Faculty of Information Sciences and in the Postgraduate Programs in Information Sciences / UFMG, Promestre / UFMG and Museology and Heritage / Universidade Federal do Rio Grande do Sul. Coordinator of the UFMG Network of Museums and Spaces for Science and Culture (April 2017 to June 2021). She develops research on History, museums and temporalities; museological evaluation of museums and university collections. She was director of the Abílio Barreto Historical Museum and Superintendent of Museums of the State of Minas Gerais.

Roper is the Curator of the University of the West Indies Museum and former Research Officer and Acting Director of Liberty Hall: the Legacy of Marcus Garvey. As Curator, she was organizer of the Monuments in the Caribbean Series.  Her research interests explore histories of Caribbean childhood, museum education practices, and pedagogical approaches to the study of history. She has published articles on Afro-Jamaican childhood and social policy in Jamaica in the Journal of the History of Childhood and Youth, Journal of Caribbean History and Caribbean Studies.”

Durand is a consultant in the fields of museology, educational and multimedia communication, as well as marketing, tourism and cultural management for museums, heritage and educational institutions, agencies and offices specialized in cultural, tourism and marketing services, nationally and internationally. An ICOM member since 1991, she is part of the ICOFOM Regional Subcommittee in Latin America and the Caribbean (ICOFOM LAC) since 1991 and was a member of its Advisory Council until 2007. She has been Vice President of the International Committee on Audiovisual, New Technologies and Social Media of the ICOM (AVICOM) and currently its ambassador for Latin America. She is a member of the board of directors of the International Council of Museums-Mexico (ICOM-Mexico) period 2018-2022. 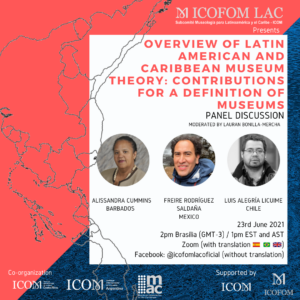 Registration for ICOFOM LAC webinar
The second webinar will address the theme “Overview of Latin American and Caribbean Museum Theory: Contributions for a Definition of Museums” on June 23, 2021, at 2:00 pm (GMT-3 – Brasília time).

Attention: you will receive an email with the link to access the platform on the week of the event.

She was instrumental in the creation of the Museums Association of the Caribbean (MAC), serving as founding President from 1989. She was also active first as a Board Member and then as President of the International Association for Caribbean Archaeology (IACA). She also served as UNESCO’s Intergovernmental Committee Chair for the Promotion of Return of Cultural Property to Countries of Origin or its Restitution in Case of Illicit Appropriation (ICPRCP), from 2003 to 2005. In 2007, she was appointed President of UNESCO’s International Advisory Board Memory of the World (MoW) Programme, as well as serving as Rapporteur and Vice- Chairperson on the World Heritage Committee. She has recently been appointed to the board of UNESCO’s newly established International Centre of Documentary Heritage (ICDH).

In her capacity as Special Envoy of Cultural Heritage by the Government of Barbados, she has been responsible for advising Government on technical issues and development policies, and represents the nation at regional and international levels. She currently serves as the Chairperson of the Board of the Barbados National Art Gallery, and similarly chairs the Barbados National Commission for UNESCO.

Alissandra Cummins is a Fellow of the Museums Association (UK), An Honorary member of ICOM and a member of the Commonwealth Association of Museums’ Cowrie Circle. She was awarded Barbados’s Gold Crown of Merit in 2006 in recognition of her services to the development of heritage and museums.

Freire Rodríguez Saldaña is a Sociologist with training in Art History and Museology. He has professional experience of more than twenty years in the world of museums, first as a mediator in the Wings and Roots to Children Program. Then, for just over fifteen years, in the National Coordination of Museums and Exhibitions of the INAH, starting as a collaborator of the Subdirección of Museology, with the opportunity to participate with various areas and projects of the Network of Museums of that institute, closing his cycle as head of the National Program of Public Studies. He has participated in various national and international forums and has publications on museological theory and public studies. He was a representative of ICOFOM-Mexico from 2013 to 2015 and member of ICOM. Currently, he is an independent researcher.

He has published articles on the history of museums in Chile, museology, heritage, memory and education.

He was a teacher of the Educational Department of the National Historical Museum, Coordinator of Education of the Villa Grimaldi Memory Site. Today he is Head of Research at the National Historical Museum. He is the Principal investigator of the Fondecyt project (11200259): History of heritage practices in nineteenth-century Chile. The case of the heritage collection of Benjamín Vicuña Mackenna.

His research focuses on the study of material culture, especially museum collections, processes of monumentalization and patrimonialization, related to the use and social appropriation of the past in memory, history and historiography.

Latin American and Caribbean Perspectives on The New Museum Definition: “Decolonization of museum thinking and theory to discuss the definition of museums”, 28th April, 2021

Link to register for Panel: https://us02web.zoom.us/webinar/register/WN_1TXSlrbTQYOvaLaCl_45tg 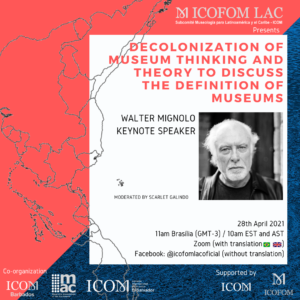 ICOFOM LAC are pleased to announce that Walter Mignolo will be the keynote speaker at the first webinar in the project Latin American and Caribbean Perspectives on The New Museum Definition: “Decolonization of museum thinking and theory to discuss the definition of museums”! This webinar will be moderated by Scarlet Galindo, Vice president of ICOFOM LAC.
Walter D. Mignolo is the William H. Wannamaker Professor of Romance Studies and Professor of Literature; and Director of the Center for Global Studies and the Humanities at Duke University. He was associated researcher at Universidad Andina Simón Bolívar, Quito (2002-2019) and an Honorary Research Associate for CISA (Center for Indian Studies in South Africa) (2015–), Wits University at Johannesburg. He is a Senior Advisor of DOC (Dialogue of Civilizations) Research Institute, based in Berlin and received a Doctor Honoris Causa Degree from the University National of Buenos Aires, Argentina in 2015 and an Honorary Degree from the University of London, Goldsmith, in 2018. Among his books related to the topic are: The Darker Side of the Renaissance. Literacy, Territoriality and Colonization (1995, Chinese and Spanish translation 2015); Delinking: The Rhetoric of Modernity, the Logic of Coloniality and the Grammar of Decoloniality, 2007), translated into German, French, Swedish, Rumanian and Spanish. Local Histories/Global Designs: Coloniality, Subaltern Knowledges and Border Thinking (2000, translated into Spanish, Portuguese and Korean); and The Idea of Latin America, 2006, translated into Spanish, Korean and Italian. On Decoloniality: Concepts, Analysis, Praxis, co-authored with Catherine Walsh, 2018; The Politics of Decolonial Investigations, Duke Press, 2021).
Tune in to this webinar on April 28th, 2021 at 11am Brasília time (GMT-3), 10am EST and AST on Zoom (with translation), Registration Link (limited capacity): https://us02web.zoom.us/…/reg…/WN_d0Zqw2c4QFq4UkoivE76Pw or on Facebook: @icofomlacoficial (without translation).
This project has received support from International Council of Museums – ICOM (SAREC) and Icofom – International Committee for Museology.
The first webinar, “Decolonization of museum thinking and theory to discuss the definition of museums” is co-organized by ICOM El Salvador, ICOM Barbados, and the Museums Association of the Caribbean. 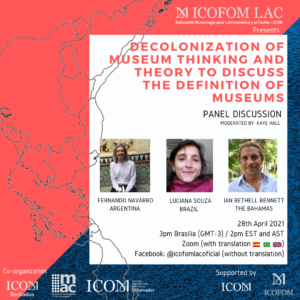 ICOFOM LAC are pleased to announce the panelists for first webinar in the project Latin American and Caribbean Perspectives on The New Museum Definition: “Decolonization of museum thinking and theory to discuss the definition of museums”! This panel will be moderated by Kaye Hall, Vice President of ICOM Barbados.

Fernando Navarro is a Professor and Graduate in Philosophy. He obtained a Masters in Social and Human Sciences with a mention in Political and Social Philosophy from the National University of Quilmes. Since 2009, he has been a member of the Regional Socio-Historical Research Institute dependent on the National University of Rosario and the National Council for Scientific and Technical Research (ISHIR / UNR-CONICET) in the Research Support Professional Career. He is Professor of Philosophical, Scientific and Humanistic Thought and Professional Ethics at the Higher School of Museology of the Municipality of Rosario.

Ian Bethell Bennett’s current artistic project explores the historical implications of the royal corporation on “for export” in the postcolony. His recent publications focus on unequal development in the Caribbean particularly in The Bahamas and Puerto Rico.  He writes on art and culture and has participated in NE7, NE8, and NE9, as well as in 2018 Double Dutch “Hot Water”. He works around race, gender, class development, and unequal spatial relations.  He writes in the daily newspapers on gender and development.

Tune in to this webinar on April 28th, 2021 at 3pm Brazil time (GMT-3), 2pm EST and AST on Zoom (with translation), Registration Link (limited capacity): https://us02web.zoom.us/webinar/register/WN_1TXSlrbTQYOvaLaCl_45tg  or on Facebook: @icofomlacoficial (without translation).

The first webinar, “Decolonization of museum thinking and theory to discuss the definition of museums” is co-organized by ICOM El Salvador, ICOM Barbados, and the Museums Association of the Caribbean.

“Towards a definition of the museum from a Latin American and Caribbean perspective: epistemological foundations” 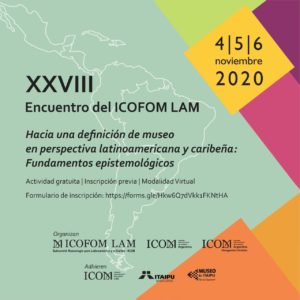