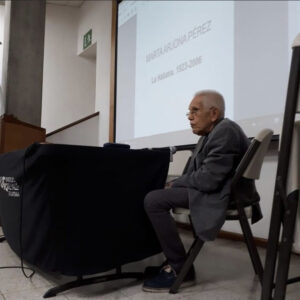 At the beginning of July 2021, Architect Dr. José Linares Ferrera, Pepe, passed away, mourned by all his colleagues and friends. We have lost an essential pillar of culture and particularly of museography in Cuba, to which he dedicated his life and devoted himself to until his last moments.

Born into a humble family, from his youth he was fascinated by the then almost unexplored world of museums, with an exquisite taste and an exceptional talent for drawing, design and creation. At Servando Cabrera’s house, he met Marta Arjona, when she was immersed in the creation of what would later become the enormous network of museums that the country has, and for that we owe a lot to both of them.

Graduating in Architecture, he completed advanced studies of the specialty at the Carolina University in Prague, where he obtained brilliant marks. He continued working with Marta uninterruptedly in the projects of creating new museums, as well as the training of personnel to assume tasks in the new institutions, and is the main proponent of the most important remodeling and readjustment projects of the pre-existing museums, highlighting the work carried out in the Oscar M. Rojas de Cárdenas and Emilio Bacardí museums in Santiago de Cuba. He organized and actively participated in the frequent cultural exchanges between the CAME bloc of countries, and assumed the curatorship of the most important exhibitions that were presented for the first time in the world, mainly from the funds of the then called National Museum.
When Law 23 was enacted, on the creation of municipal museums, he directed a team that was in charge of the creation of these institutions, from the Maisí Municipality in the easternmost part of Cuba, to Sandino in Pinar del Río. It was a titanic task, from whose experiences he obtained the fruits to theorize about this unique experience in our Region and in the world.

He developed great pedagogical and educational work, which lead him to translate his experiences into important textbooks about Museography, which constitute essential references in the national and international sphere.

He was the founder of the first Regional Organization of Museums in Latin America and the Caribbean attached to the International Council of Museums, ICOM; to which he remained linked until his death, occupying the lifetime position of Honorary President. He represented Cuba in numerous events of this organization and participated in several General Conferences. He gave lectures on his specialty and on his numerous publications and research in cultural and educational centers. He was a member of the Board of ICOFOM LAM, currently ICOFOM LAC, from 2017 to 2020.

For several years, he continued a close collaboration with the Dominican Republic, teaching and working in museums in that country, especially the Montecristy historical site.

He was linked as Head of Projects to the creation of the José Martí Memorial Museum, at the base of the monument of the same name, inaugurated in 1995. He met Fidel Castro, for whom he always felt enormous admiration for and of which he felt extremely proud, until again in the great project of the new National Museum of Fine Arts, the Commander in Chief entrusted him with this task as the main proponent of the project, which culminated in July 2001 with the expansion of this important institution incorporating three buildings in the Historic Center of the City. He immediately continued the enormous task of remodeling the building of what would become the Colegio de San Gerónimo, together with his close friend Eusebio Leal, with whom he shared a deep friendship.

He was awarded the most important decorations by the Culture sector, such as the Distinction for National Culture, Juan Marinello Order, Alejo Carpentier Medal, National Prize for Cultural Heritage and many others, some of an international nature.

He was a Member of the UNEAC, UNAIC and Professor of the Specialty of Museography at the Colegio de San Gerónimo of the University of Havana.

Next September he would have turned 81 years old.